Some of you may have heard Ann Wroe, obituaries editor for The Economist, interviewed on the CBC about her eloquent "elegy for the English pub." The old fashioned English pubs,  icons of Englishness itself, are shutting their doors at an alarming rate of 50 a day, or 6000 in the last 5 years! Some friends had dropped off a copy of the magazine a while back, and I'd meant to post something on it, but had forgotten until I heard her on the radio last night. When a pub dies, Wroe writes, much more dies with it. Here are a few excerpts that get at how a good pub serves its community, and a link to the full article at the bottom. 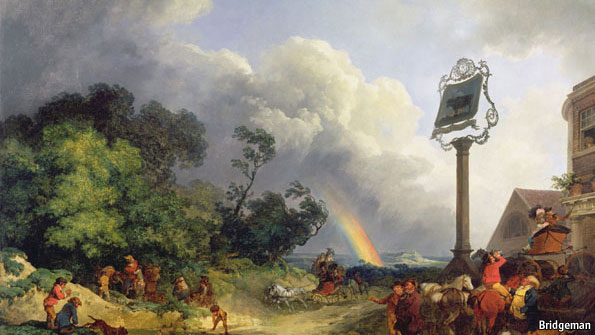 The church can go, long since the preserve of a flower-arranging few; the local shop can go, since the distant hypermarket’s cheapness is worth the petrol; but the vanishing of a pub means, by common consent, the loss of the beating heart of a community, in town or countryside. A pub can become a sort of encapsulation of place, containing some small turning’s grainy photographs, its dog-eared posters for last year’s fete, its snoozing cats, its prettiest girls behind the bar and its strangest characters in front of it. The Square & Compass at Worth Matravers in Dorset, on the Jurassic Coast, has accumulated so many fossils brought in by punters that it has its own little museum. Most longstanding pubs have a fossil equivalent, and not merely on the human side: cases of moths, dusty farm implements or, at the Widow’s Son in Bromley-by-Bow, a hanging bundle of blackened hot-cross buns to which, every Good Friday for 150 years, another has been added.


***
Their loss is also the disappearance of a kitchen, or a sitting room, or some comfortable dim place where there is warmth and a welcome, and no questions asked, all over Britain. The naffer brand of pubs have for years made Tudorbethan kitchens their model, all horse-brasses and spindle-back chairs; the more fashionable or very much older favour flagstones, open fires, dried flowers and pewter. It is all a variant on the origins of pubs in the kitchens of wayside farmhouses, where a man exchanged his own hearth for another.
He was not, however, alone there. In the pub he met his fellow men and, with them, formed a society of musers and drinkers. He mingled with people he might not otherwise meet, had words with them, was obliged to take stock of their opinions. In a highly stratified society of worker, merchant and lord, the pub was open to everyone. Only the Victorians tried to complicate matters with separate parlours and saloons based on class.
Their walls and screens survive, but reflect different attitudes. Most pubs retain a peculiarly English blend of socialising and privacy. Regulars prize maze-like or womb-like pubs, tiny rooms and dark corners; for hearths and fires, no matter what the season; for a sense of history in the layers of paper, clutter and paint; for an indefinable grubbiness and informality. In “trendy” pubs people go to be seen, either for their clothes or the sleek cars they have left in the car park; but pubs, like homes, are not about fashion statements or public preening. By the same token, the building itself often has no importance. What matters is the atmosphere, that indefinable thing that no one can put a finger on, until some alteration kills it. “Ninety-nine per cent of change in pubs is for the worse,” says one twenty-something, cheerily enough. “Attempts to modernise a pub always fail.”
***

The Lewes Arms saga points to a deeper truth: pubs are loved for their subversion. Pubs made a setting ideal for secrecy, murky as a pint of mild, but also open to the unexpected: the bang of the door, the stranger entering, the sudden galvanising piece of news.
The provision of drink to all-comers was a task both sacred and profane, and pubs reflected that dangerous ambiguity. The medieval alehouse, in which Langland’s peasants drank themselves insensible, was often built in the lee of an abbey or a church from which the customers, including clergy, came direct. The Victorian gin palace was a church itself, equipped with coruscating lights and screens to dazzle the poor sodden souls who took refuge there. The “improved public houses” of the 1950s tried to look like dull suburban hotels. But no matter how pubs scrubbed themselves up or put in “family rooms”, disrepute still dogged them. No wonder that the Queen Vic in “EastEnders”, one of Britain’s most popular TV soaps, was the scene of three extra-marital impregnations, two criminal raids, two murders and, in September, a calamitous fire, probably arson, which burned it to the ground.
Drama suits pubs. They are places for pushing limits, and not just in the sense of jars and fists. A pub is where Prince Hal first tested his mettle for Crécy and Agincourt, and where the knee-high David Copperfield, on the run, confidently ordered a glass of “the Genuine Stunning”. Pubs are where the first workers’ associations met to demand higher wages, and where (at the Crown and Anchor in the Strand) proper electoral reform was first floated. “The Communist Manifesto” was jotted down, locals claim, at the Flask in Highgate, where Karl Marx was a regular. Pepys went to pubs to sing, as much as to drink. In pubs normal wariness is suspended in favour of live and let live, of free speech and free space. The words “Free House” carry on the theme, somehow, in ways a corporatised pub and a constrained landlord cannot. Americans have their guns; but the Briton has always had pubs, liberty glowing in thousands of small corners, as his weapon to beat back tyranny. John Bull lives there. When pubs are swallowed up, or die, something very much more than a beer-shop perishes with them.
See the full article, well worth a read, here.
Posted by Rose at 8:28 AM