Hey folks,
Just wanted to share a few snaps form the recent Ladies Beer League Cask Fest, hosted by The Stubborn Goat, a new gastropub in Halifax, and take the opportunity to talk a bit more about cask conditioned ale. As many of you will know, Terry has had his own Best Bitter on tap now at The Townhouse for almost two months. Or you may have noticed the rather large wooden tap handle that recently appeared at the end of our bar... Terry's beer is cask conditioned, and we are among a small number of pubs east of Montreal that regularly serve cask ale. The first place was The Granite Brewery, started by Kevin Keefe. He still produces excellent cask beers for the same pub, now under new management and known as  The Henry House in Halifax. He also supplies The Spitfire in Windsor, and as of this past Saturday, Bar Stillwell, also in Halifax.

What is cask conditioned ale? 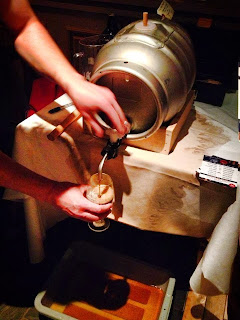 Basically it is unpasteurized, naturally carbonated beer. Instead of forcing CO2 or beer gas into the keg of beer (the usual mode of carbonating), cask ale, or  "real ale," as it is often called, goes through a secondary fermentation process in the cask from which it is then dispensed. They can be dispensed directly from the cask by gravity - as in the popular Firkin Fridays or Cask Nights recently started up in Halifax by Garrison and Propeller. There the cask (or firkin or pin, depending on the size of the vessel) is often set on the bar and a spigot pours the beer directly into your glass. This works well for special events where they are drained almost immediately, because the cask is not refrigerated and oxygen gets into the cask as you pour, the beer will spoil fairly quickly.

Our hand-pump or beer engine, is the other traditional method for dispensing cask ale. Here the pulling motion of the tap handle literally "pulls," or pumps, the pints through the lines and into your glass. This way the cask can be refrigerated, and you can set up some beer gas to form a blanket on the surface of the beer to prevent contact with any oxygen, without any of the gas actually dissolving into the beer.

So what's the point of all this ?

Well, the best way to find out is obviously to come in and try a pint for yourself. But I'll try to convey a bit of it here...

Cask ale is delicious. In an interview with the Coast, Ladies Beer League (LBL) co-founder, Tracy Phillippi, highlights the more natural flavour and softer mouthfeel, "It's usually smooth and really clean." You don't get the prickle on your tongue that you get from the CO2 in other beers and which can mask some of the beer's more subtle flavours. It also doesn't leave you feeling full or bloated, so you can drink quite a bit more!

There's also something unique about each cask, due to the organic development of the beer in the very cask from which it's dispensed - no two will ever be exactly the same. There's something a little special about drinking cask ale - much in the way there is in popping the cork off a bottle of champagne. "If you watch someone tap a cask, it's celebratory," as Phillippi says in the interview with the Coast. "Someone always gets a beer shower. It's always different. It's always an adventure."

So, cask beer is a bit of a specialty. It is far more common in Britain, where Terry and I first tried it, and where the revival in interest began decades ago. But here in North America,  more and more of the breweries as well as the beer lovers are getting curious about it and starting to try it out.  Although festivals have been going in Toronto and Vancouver for several years now - the LBL event last weekend was the first of its kind in the Maritimes. A few of the breweries, like Bridge Brewing from Halifax and Boxing Rock from Shelburne, were serving the first cask ales they ever produced! 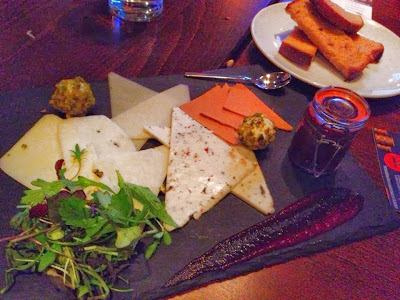 So, the event was a huge success. At least from our slightly inebriated perspectives. The beers were remarkably good, especially considering the novelty of the process for many, and the venue was lively, warm, and filled with beer lovers! Plus we had a chance to catch up with a few old friends and with all the new friends we've been making in the industry. So far, my unscientific survey seems to point to the fact that people who like good beer, tend to be good people...

Oh, and the food we sampled was quite tasty! Queso fundido, coconut shrimp, and a lovely cheese board complete with one of the strangest cheeses I've yet tried, the brown and incredibly creamy Ski Queen made from cows whey...

Big Spruce's Glenora whiskey-spiked stout was declared the Cask of The Year, and it certailny was rather tasty,  although we'd also like to make special mentions of Boxing Rock's Brown Ale, Hell Bay's Dark Cream Ale, and Bridge's very interesting (and thankfully not too sweet) Apricot IPA. It was the first time we made it to a Ladies Beer League event, and I strongly encourage any of you to try to make it to their next one. They are making waves as the first organization of it's kind in the country, and really boosting the profile of craft beer in the region by hosting excellent events focused one craft beer, beer education, and usually involving local food too!

As if that wasn't enough, Bar Stillwell, one of three beer focussed bar/resto just opened in Halifax in the last week or so, was just in it's second night of existence so we swung by to check it out. There we had the Granite's Best Bitter Special - ant toasted it's brewer, Kevin, the Godfather of the Cask" Keefe! It's a nifty little spot, nice design, great beer selection, delicious hand-cut Tokyo Fries, and a cozy little arcade downstairs mimicking a subway station- complete with a real pinball machine!

All in all an excellent weekend for beer lovers in the area - and inspiring us to look into hosting a mini cask fest of our own... stay tuned for more details as they unfold... 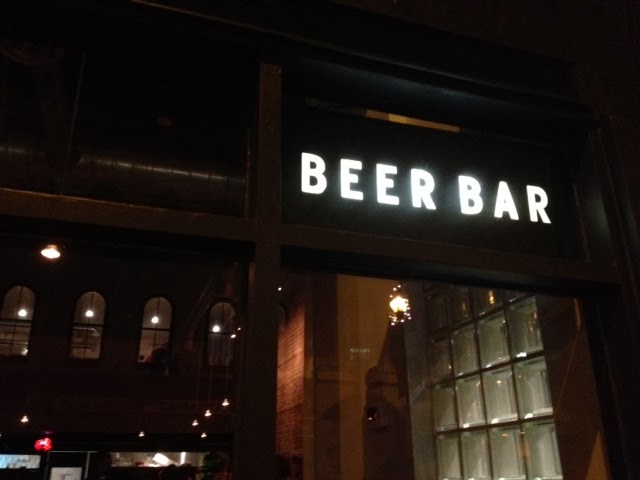