Well, the winter has set in, and it is certainly not kidding around this time. We've already had several stormy nights where our only patrons have showed up on skiis, but we seem to be in the midst of a January thaw as I write this. I just wanted to let you know about a few things happening at The Townhouse this month and next. 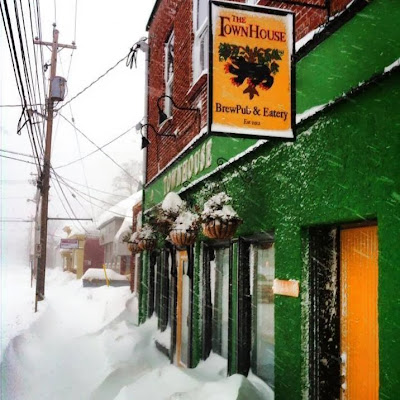 With the exception of hosting an informal Irish traditional music session on Sunday nights, being a music venue wasn't at the top of our minds in planning the pub. We were more ffocused ona  place to bring people together for conversation, good food and really good beer. However, there are so many excellent musicians in and around the area who have approached us about playing since we opened, that we do our best to rearrange the chairs and tables and make space for music at least twice a month.

Despite the lack of a stage, a bit of an awkward lay out, and the complications of having two different types of liquor license within one space, with the loan of a small PA system from Clay Yancey (host of The Antigonish Underground Jam, Friday nights at the legion!) and a bit of shuffling, the Townhouse makes for a cozy, intimate venue. And to our initial surprise, the room, it turns out, always sounds great. With all the shows we've ended up doing, we've decided to purchase our own PA, and eventually to renovate the upstairs (first and foremost to house a larger brewery) and create a special functions room, complete with a proper stage and designed with hosting music in mind.

In the meantime, because we still don't do music shows too often, the acts we do bring in are musicians Terry and I are both really excited to see. So far, we've focused on folk, blues, old style-country and bluegrass, but bringing in people we feel are doing something really unique and special within those loose genres eg. Michael Hurley, Morgan Davis, Al Tuck, The Minnikins, The Sin & The Swoon, The Modern Grass, etc. As we only seat 60 people, and do have the aforementioned lay out issues, we encourage anyone keen to have a good seat for the show to come in a little early and grab a bite to reserve them. And we do have some particularly interesting shows coming up over the next few weeks... 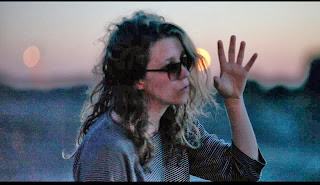 Our next act is one I feel really lucky to be able to be able to bring to Antigonish. Here for Halifax's In the Dead of Winter Festival, Fiver is the solo project of Simone Schmidt. I'm not alone in thinking Schmidt is one of the most exciting musicians in Toronto these days (see The Star article, that calls her the voice of 2 of the year's best albums). Despite her youth and edgy aesthetic, she has a remarkably timeless, almost transcendent, sound. I first got to hear her play several years ago at a small  music festival in New Brunswick, where she was performing in a duo called $100. Her incredible deep, haunting voice, stripped down musical style, and sharp song-writing (kind of a gritty contemporary take on traditional hurtin' country songs) really blew everyone away - this low-key acoustic duo basically stole the whole festival. This time around, Simone is fronting her own band - we'll have a drum kit set up in The Townhouse for the very first time! Fiver's sound is a somewhat mournful, country-esque rock, reminiscent of Townes Van Zandt, that I think The Townhouse's music crowd will really appreciate. We have already heard from one couple who will be driving 1 1/2 hours just to come see the show. You can check out her song Oh Sienna below, for a taste of what's to come.

This show promises to be a truly exotic, hair-standing-on-end, treat. Although I have yet to see them play, they come very highly recommended - as much for their eccentric intensity as their virtuosic plucking and bowing of strings. A recent listen to their  CBC music stream revealed influences from Roma and Eastern European folk traditions, conjuring visions of full, whirling, multi-coloured skirts, flying white shirt-tails, and long, dark beards. Halifax based Jacques Mindreau, violin, and Corey Hinchey, baritone ukelele, form the core of the group and we've just managed to squeeze in a show during their NS tour before their accordion player (visiting from BC) heads off to India to study Harmonium. There may even be a guest appearance from Antigonish's own gypsy-jazz violinist, Donald MacLennan...  Below is an excerpt from an article from The Coast.

"Folklore music," as Jacques Mindreau describes it. "We try to tell stories with our music."
Their stories come from everywhere: their dreams; their imaginations; old folk tales of wizards and horses. The goal is non-verbal communication: Hinchey, with his baritone ukulele, will strum and stomp without any sign of fatigue, while Mindreau, in addition to playing a wicked-fast violin, has an operatically dramatic voice, made all the more operatic by the fact that he never sings in English. "It's sort of ineffable, the stories," Hinchey says. "They feel the music, and they jive it, and they give it its life."

Coming up in early February is another event we're really looking forward to:

CRAFT BEER TASTING, Feb. 8, details TBA
We're bringing Tracy Phillippi, of The Ladies Beer League, back to town to host another guided craft beer tasting. While the last event was a thank you to our SUDS Club, this one will be open to the public, and feature 7-8 Maritime Craft Beers paired with appetizers from Chef Jacob Buckley and the Townhouse kitchen. While craft beer is gaining more and more popularity across the world, and more and more styles of beer are becoming available close to home (4 new breweries opened in NS in 2013!), people are getting more and more adventurous in what they want to drink (barley wine, smoked porter, or sour beer, anyone?). Everyone is starting to take beer a little more seriously, and having a lot of fun doing it. The author of a book on tasting beer that I've been reading, claims that if you can get a few beers into a wine sommelier they will admit that beer can do an even better job of pairing with food than wine!
Whether you're new to craft beers or an IPA aficianado, this promises to be an excellent evening - Tracy is a certified beer judge, experienced professional and home-brewer, writer for TAPS Magazine, creator of Craft Beer Experiences, and an excellent guide through the multi-faceted, oft confusing, and fun world of craft beer. Come and try some new beers, learn a bit about different styles, and about how to appreciate that beautiful beverage even more! Details about tickets and beers will be forthcoming - stay tuned!
The Townhouse will be closed for a break and a few renos, from February 18 - March 3.
Finally, we just wanted to let you know in advance that The Townhouse will be closing for a few weeks towards the end of February. Don't worry, we'll be back in March and better than ever! We all need a bit of a break, and a chance to do a few renovations and things we can't do while open, and thought we ought to get it out of the way during the slowest time of year. We're very sorry for any inconvenience, and hope you understand that it's all a part of making sure this little business is sustainable in the long term!
More music coming up when we re-open:
MAGNOLIA, March 8th, details TBA
Halifax based duo play folk/jazz/blues. Check them out here!