As it's a small town, many of you may already know us and it certainly seems like everyone's already heard what we hope to be doing. That said, we'd like to introduce ourselves to those we may not have yet met, and to let you in on our plans to alter the social topography of this little town. Terry and I have decided we'd like to open Antigonish's first brewpub! We're big fans of locally produced, all-natural, food and drink, and of the cozy, laid back vibe of the traditional pubs of the UK and Ireland and we feel such a place would fit into this town quite nicely.

We've been researching, day-dreaming, checking out potential locations, and developing our ideas for about a year now. We moved back to Antigonish this past spring and have just been able to get back to our business planning (after several months of renovating and settling into our tiny new home). It's not going to be easy and it won't happen too quickly–there are many long days of researching, number crunching, exploring regulations, applying for permits, and a lot of money to be raised. And then there'll probably be renovations, and inevitably set-backs, and possibly even nightmares, and so on... But we figured, why not let you all in on the whole process? We'd love to get your feedback as we go along–your suggestions, concerns, ideas will be very helpful to us. We want to hear what you think this town really needs!


So first, the introductions:

Terry Piercey is a Newfoundlander (one might ask what more you need to know?) who has lived in Sackville (NB), Vancouver, Guelph, and Halifax. He's an artist (he makes sculptures, drawings, tiny electronic devices, etc.), carpenter, musician, enthusiastic player of all pub/leisure games (you know, darts, shuffleboard, bocce, shove ha'penny...), and a huge beer enthusiast and home brewer. He loves real ale, IPA's, bitters, peculiars, and stouts, wooden furniture that's well made but knocked around a bit, and he really appreciates nice lighting and appropriate music volumes. And cat videos. He is to be brewmaster and bar manager, as well as our head carpenter and furniture designer (and he'll probably hate this attempt at describing him). Here is a photo of him at one our favourite NS pubs, The Henry House in Halifax. (Have you tried their Best Bitter Special?) 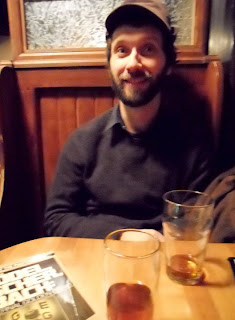 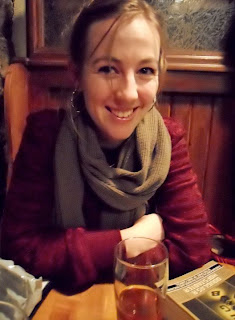 And, unsurprisingly, the other photo is me (Rose Murphy) in the very same place. I'm an Antigonish native, but have lived in Halifax, Sackville, Toronto, and Victoria over the years. I've played in some bands, worked at college radio stations, and, in preparation for life behind a bar, I spent several years studying philosophy. This is also the first time I've ever attempted a blog (so bear with me). But what I really, really love is food. I have worked in restaurants and kitchens (some of you may remember the Café B2G, my first venture), but I have also worked on organic farms as a WOOFER, in a plant nursery, doing education and outreach for a really great organization called ACORN that supports organic growers across Atlantic Canada, and most recently as a food security researcher and a VOICES Antigonish volunteer. I'll be running the kitchen which will be serving as much locally produced, wholesome and tasty food as you can eat. This will mean doing a lot of back and forth-ing with local producers (happily my sister and her fella run a pretty serious organic garden just outside of town) and growing some of our own ingredients. I'm really encouraged by the number of people producing food in the area–and not just veggies, but organic meat, eggs, cheeses, and fruit, preserves, pastries...

Anyway, this is just a very brief "hello Antigonish" post–we'll be posting a lot more (hopefully) over the next few months. We'll show you some of the pubs, food and beers that have inspired us, and tell you more about our plans, menu ideas, brewing operations, etc.


But most importantly, we really hope to hear from you! Do you think this is a not bad, pretty good, or an absolutely terrible idea? Tell us what you want in a pub! For starters: what you think of our interim name, The Townhouse?

Anyway, until next time, well...