Hi, again. We just wanted to share some of the exciting beer news that has been coming out of Atlantic Canada the last while. Just as NS wines have gone from novel experiment to an award winning industry in the last decade or two, we're hoping truly local beer will soon be as sought after, tasty, and abundant. 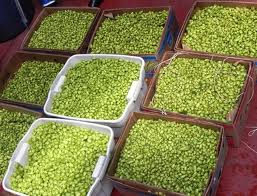 (photo source: dailybusinessbuzz.ca)
As you may have heard, there has been a lot of talk about local hops in the past year or so. Check out these stories on Evan Price of Fiddle Hop Farms and the burgeoning Maritime hop industry. If you'd be interested in growing hops for The Townhouse and the other NS/NB breweries scrambling to source their hops locally, please get in touch!


We've also read in the latest edition of Taps Magazine, that Randy Lawrence of Port Williams' Sea Level Brewing is in discussions with the NS Department of Agriculture to see whether a Maritime kilning operation could take locally grown grains from field to bottle! Currently the closest place that takes raw grain and produces the malted barley needed to make beer is in Montreal. But here's hoping that the very real interest from micro-breweries like Sea Level, Propellor, and Picaroons in producing all-Maritime beer, encourages the $20 million dollar investment required to create truly local brews. Sounds like just what our ailing agricultural industry needs -a new crop for a ravenous local market.

And finally, Picaroons, NB's excellent micro-brewery, official beer supplier of SappyFest, and producer of one of the only two Maritime organic ales I know of, is about to open their retail space! Sean Dunbar, head of Picaroon's, is not only a great brewer, he's also one of the nicest guys you'll ever meet and a very active and dedicated member of ACORN's board of directors. He's been trying to encourage local production of hops and grain for years now. He also gave a very informal and entertaining talk on the history of beer  at the Sackville (NB) legion last year (did you know Oland's is named for the late, great FEMALE maritime brewer Susanna Oland?!). You can get his excellent Best Bitter and Yippee IPA at the NSLC.
Well, that's all for a lazy Sunday afternoon. We really appreciate hearing whatever is on your mind, epecially if it relates to beer, food, eating, drinking or growing things...
Cheers!
Posted by Rose at 10:56 AM