Lessons from a Community Owned Pub and Veteran Brewer 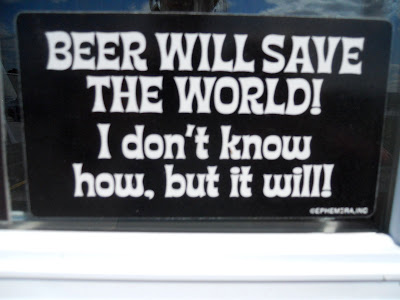 Well, we have one more whirlwind trip to the valley behind us, and finally some potential pub locations before us! But we'll have to move quickly, so we're thinking about our funding options again. As part of the Self Employment Benefits Program that has allowed us to dedicate so much of our time to getting this whole brewpub thing up and running (someday, sooner than later, god/universe willing), we’re paired up with someone from XEDC, as kind of a business mentor/therapist/case worker. We recently were assigned to a new XEDC liaison, Melissa MacMaster, who has turned out to be a real dynamo! She’s really gotten behind the brewpub idea and is actively investigating the community-supported funding angle with us. She thought we should have another, closer, look at the CEDIF model (Community Economic Development Investment Fund, discussed on this blog a while back along with Community Supported Restaurants), and recently arranged a meeting for the three of us with the CEO of the investment group behind The Port Pub, a community owned “gastropub” in Port Williams (which we visited once earlier this spring and have also discussed here), to talk about their experience setting up the CEDIF that raised $1.2 million to fund their start-up.

So, last Thursday we spent about 8 hours in the car, and had a great lunch on the Port’s sunny, riverside deck (they even provide sunhats, sunscreen, and sunglasses to patrons who may have forgotten what the sun looks like and come unprepared). Dr. Bruce McLeod joined us part way through, and I discovered the challenge of the lunch meeting. All you business moguls and accomplished multi-taskers out there have probably mastered this one already, but being new to this high-flying world, I, at least, was a bit confounded. The trouble is, if the food is any good at all, and you’re actually hungry, it’s very difficult to eat as much as you’d like, and properly enjoy your food, all while presenting yourself as a moderately competent, socialized adult, and perhaps even participating in the in-depth conversation around you. While we continue to struggle to overcome such business-related challenges, I reassure myself that at least I still have half of my tasty reuben in the fridge.
Bruce was one of the Port’s original six investors, a group of local physicians who would to get together regularly for Friday evening drinks, who all agreed one night that they’d really like to have their own pub right in Port William rather than having to drive into Wolfville. He was good enough to provide us with a copy of the pitch he presented to potential investors which outlined the basic idea (to start a local pub with really good food and really good beer), the people involved (including Michael Howell, of the Tempest and Slowfood NS, who came on as executive chef), the basic business idea (hit the price point just above student bars, but below upscale restaurants, and raise enough capital to run the business free from financing and mortgage payments), the projected costs (the aforementioned million or so), and the projected sales. He’s pleased to report that they ended up with a group of 60 investors, who bought between 1 and 20 shares each. They bought a plot of land right along the river’s bank, and built the Port from the ground up, and it has housed some serious parties since even before the roof went on.  They have made it a priority to use local contractors and materials, including beautiful table tops made from aging elms cut from neighbouring land, and lovely rustic deck furniture built by McLeod himself. The local theme continues throughout the business, guiding their menu design, food sourcing and hositng of community events, and culminating in their annual 10 km Dinner. Oh yes, and Bruce also reports that they have easily surpassed their sales expectations.
So, what’s a CEDIF again? Well, here is a definition from the government’s website: “A CEDIF is a pool of capital, formed through the sale of shares (or units), to persons within a defined community, created to operate or invest in local business. It cannot be charitable, non-taxable, or not-for-profit, and must have at least six directors elected from their defined community.” Basically, it’s a community based investment group formed to fund specific community oriented initiatives. I won’t go into the details, but McLeod ultimately seemed to suggest that although it has certainly worked for them, unless we were going to need massive amounts of money (our start-up won't be anywhere near $1.2 million), and had massive amounts of time at our disposal (we’d really like to get cooking here), the CEDIF process may not be entirely necessary.
A CEDIF has attractive investor incentives including 30-35% Equity Tax Credit, 40% RRSP eligibility, and a 20% government guarantee (hopefully this means something to you, these phrases are only beginning to have meaning to us). However, it took 8 months to set up and produce the 100 page “simplified” (really? At 100pgs?) offering document, and many investors were unable to use the RRSP eligibility because their investment firms would either refuse to transfer it (something about too small an investment, and too much paperwork?), or they would charge a prohibitive amount (think $300/year) to do so. Plus, access to the Equity Tax Credit can easily be set up without a CEDIF as long as one has 3 or more investors. Which just leaves the 20% government guarantee. Now this sounds very reassuring, and would certainly be appealing, however, I am almost positive I read a note on the CEDIF website last year saying they had cancelled this element of the program. I can now find no mention of the guarantee, cancelled or otherwise, on the website. Anyone with insight into this aspect, we’d appreciate your help!?
So, obviously lots to think about there. Bruce also shared some of the lessons they’ve learned about the restaurant/pub industry over the last few years, and told us they have recently launched another offering to raise money to expand the brewery. Which leads me to our thoroughly charming and informative visit with Randy Lawrence, veteran brewer and innovator, local beer warrior, and widely recognized hop expert (he grows 5 acres for his own use, and has recently been selected as one of only 7 North American judges for the Hop Union’s annual crop evaluation!). Randy has been brewing and growing hops since the 80s, and has created award winning beers for Paddy’s in Kentville where he created Atlantic Canada’s first dry-hopped ale, Rudder’s in Yarmouth, and is the dark genius behind Propeller’s delicious Porter. 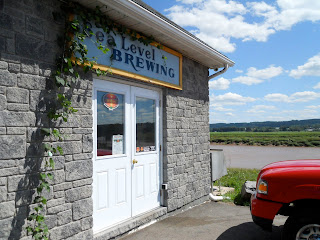 When the Port was still in the development stages, an unfortunate trip to emergency and subsequent run in with Dr. MacLeod was enough to plant the idea of incorporating an in-house brewery. One thing led to another, and now Randy runs Sea Level Brewing Co. supplying the Port with fantastic draft beer, and offering bottles, 1L growlers, and kegs to the larger area. He also grows 5 acres of hops at Sea Level Hop Farm, and has formed partnerships with other growers to increase the supply of local hops. It’s all part of Randy’s dream to make completely local beer as familiar to Atlantic Canadians as local wines have become, Beyond the locally grown hops, we need more locally grown and malted barley. You may remember from a much earlier post that Randy Lawrence, interviewed in TAPs magazine, has said he’s been in discussions with the department of Agriculture about creating a Maritime Malting facility. This would eliminate the need to ship Maritime grain all the way to Quebec and back for processing. However, despite letters from every Atlantic Canadian micro brewery saying they would use the malt, he hasn't had much luck convincing the department to get behind it. We would certainly encourage anyone involved in agriculture or government who thinks this idea makes sense (and it does make sense, doesn’t it? local farmer’s need more viable crops, craft brewers want local ingredients, locals want local beer, craft brewing is booming…) to get in touch with Randy and help make it happen.

In the meantime, Randy’s latest creation will be a heather-ale, using heather flowers grown for him by local NSCC students. He even has a custom made brew kettle with a false bottom and lower access door specially designed to handle additions like whole hops and other flowers and spices. He has certainly crammed a lot of great beer into a very small space (maybe 300 square feet?), so you can imagine how eager he is for the expansion. 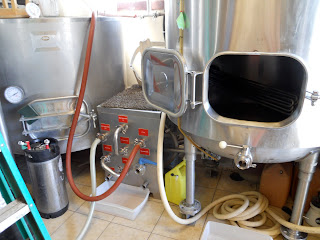 So, all in all–a grand trip, lots of info and inspiration, complete with harrowing highway experience for little adrenaline spike, soothing afternoon ice-cream, and a few souvenir Sea Level beers (yet another excellent porter!). Thanks to Melissa for making it all happen, and to Randy and Bruce for sharing their time and expertise!
I just want to point anyone interested in growing hops to what promises to be an incredible workshop being hosted by ACORN at Cornhill Nurseries this weekend, on Sunday 28th, August. Hosted by Colorado State Uni’s Dr. Ron Godin, the focus of the workshop will be on hops cultivation, including the basics of low impact hops horticulture, harvesting and processing, fertility schedule, pest and disease management–and more! Workshop participants will walk away with a week-by-week work schedule for optimal hops growth. This is a MUST workshop for anyone involved or aspiring to be involved in hops production in the Maritimes. Cost is $30/participant, register by contacting happyhopyard@gmail.com or call 506-650-1626.
For a sense of the current status of local beer check out Craig Pinhey’s article here.
For Silver Donald’s Article on the Port Pub’s community investment model check here, and for more info on CEDIF’s check here.
If you have any brilliant ideas, idle musings, or really want to help make this brewpub happen - send us an e-mail!
Posted by Rose at 8:18 AM