It's been a little while since our last post. The summer never fails to be a whirlwind of frenetic social activity. The Townhouse has been wonderfully busy, Seabright and MacLennan's Glen have been bringing in the most beautiful fresh produce, and we're all trying to squeeze in a few late summer revels before the season is well and truly finished. Most recently this has included attending our wonderful server Justine's wedding, a blueberry picking work party at farm and the fields of MacLennan's Glen with Carin and Scott, dancing some of the wildest reels SW Margaree has witnessed at The Peters' benefit concert and auction, and Terry and I sneaking away on a quick little camping trip to sleep by the beach and get in a long overdue visit to the Big Spruce Brewery in Nyanza.

But here we are, nonetheless, in September – the students are returning, the evenings are getting cooler, the harvests are getting bigger, and there is all sorts of great stuff coming up!

Just a few announcements first - We are very pleased to introduce Jacob Buckley as the Townhouse's new head chef! He trained in St. Andrew's, New Brunswick, and worked there at the Fairmont Algonquin and the Kingsbrae Arms. He has been with us in the kitchen for about three months now, during which time he has proven himself to be an excellent addition to our great core kitchen crew of Lani Vidad, Jody Fanning, and Didi Duffy. He is a true foodie, a hard working, talented, and innovative cook, and, as it turns out, quite a talented musician! Just don't get him started on jazz history or the joys of bacon unless you've got the better part of an hour to spare.... (just kidding, Buckley!) You may have noticed he's been putting out some great local seasonal specials (eg. kale lasagna, chanterelle risotto, home-made ravioli), and you can look forward to some special chef's nights once the fall harvest is in full swing!

Secondly, the beer.... it's coming. We promise. Very, very soon. But we can't say exactly when, because we don't know yet... The final okay from the Powers That Be could come at any moment. So prime your palates and get ready to charge your glasses with Terry's (as of yet still un-named) English bitter!

Next, this week's events:

Your host Katie E. will have you twisting your brains into little knots, there will be desperate competition and trash-talkery, and someone will win a pile of free beer!

We're pleased to be welcoming back Doc MacLean and his guest, Libby Rae Watson, for some low-down, laid back, steel guitar and delta blues. Anyone who caught the show last fall will tell you Doc's not to be missed! Show starts at 10pm, tickets $10 at the door. 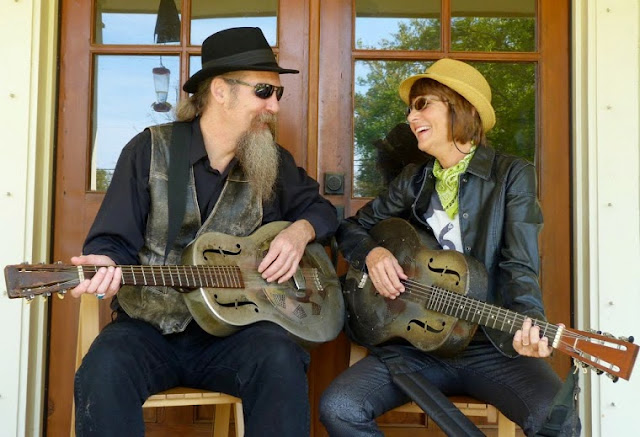 From their press release:


Libby Rae Watson and Doc MacLean  have each had their own shares of good luck and bad. Katrina destroyed much of Libby Rae's home, while Doc's world was shaken by a spectacular car crash on last year's Tour. But both of these delta songsters celebrate more good luck than bad. True to the music and culture which have shaped their lives, they each picked themselves up, stomped down those troubles, and moved forward down the Blues Highway. This fall that highway leads to Maritime Canada.

Both artists spent their formative years exploring the rural south– learning their craft at kitchen tables, on front porches, and in little juke joints. While MacLean built a career on hard travel and performance, Watson stayed closer to home– rarely venturing beyond Mississippi. "I'm really pleased that Libby Rae has agreed to be on the National Steel Tour this year," said MacLean. "She's a pioneer–  one of the only women to cross what were difficult racial and cultural boundaries–  exploring, documenting, and learning from what's now a lost generation. She's a songster-storyteller in the delta tradition– part of an unbroken chain."  The tour will celebrate the restoration and release of Watson's latest cd, "Sweet 'N' Salty," long thought to have been destroyed by Katrina.

The 8th annual, National Steel Blues Tour includes more than 80 shows across nine provinces. Watson will join the Tour for three weeks in the Maritimes.