Well, hello again, everybody. It’s been a pretty crazy time since we reported to you last. We'll start with an update on the Townhouse, including some not so great developments, and end with a great little video on a great little brewpub in Iowa, Worth Brewing Co.


So, last month we were full steam ahead trying to seal the deal to buy the dream location we ‘d been working toward for almost a year now, when the deal fell through rather unexpectedly. Before we’d even had time to feel the full force of the blow we’d found another potential location, a leasehold almost as appealing as the first building. We started to think we liked the idea of leasing after all, and especially the “not having to sell our (very) little, recently renovated house to buy a business location” aspect. One does get attached after putting months of work into a living space…

So, again, we went into high gear, hauling very obliging architects and electricians, and even the health inspector, through the space trying to assess if in fact we could fit the kitchen, brewery, wheelchair accessible bathrooms, staff bathroom, etc. into said space, and still meet the myriad health and safety, licensing, and assembly occupancy requirements. (It seems crazy how difficult they make it to find regulations and requisite dimensions for proper wheelchair-accessible bathrooms in NS!) We were just waiting on a plumber so we could round out an estimate of just how much the renovations might cost, when the carpet came out from under us and the space was gone.
Now, we certainly aren’t harbouring any hard feelings about losing those spaces, that’s just the way things go sometimes, but this time it really did deal us quite a blow. We were pretty upset, frustrated and disheartened. The location is such a critical part of this project, we really need just the right sort of space–one with some charm, character, and able to adequately house the very different aspects of our business–and now two of the best possible locations in town had just slipped through our fingers.
We decided to take a bit of a step back from the biz-world and focus elsewhere for a bit. We finished the deck on our little house, did some landscaping of our yard, and have put in about half of a little vegetable garden. Terry has become an avid cultivator of some lovely little hop plants, and has just put his third brew (a single hopped bitter, an Irish stout, and now a pale ale) into the awesome little kegerator (simply a small refrigerator with his very own little keg inside it) that he’s got set up in the mudroom. 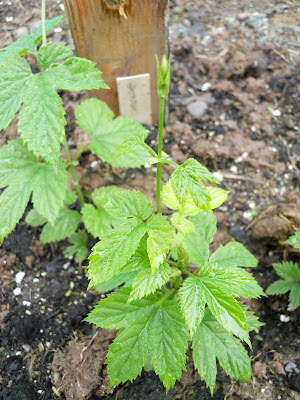 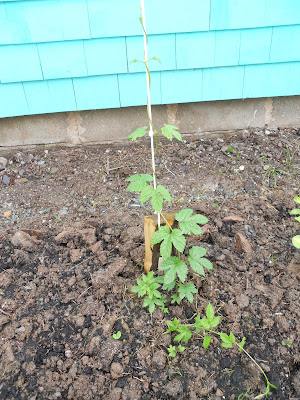 After the gardening, and few family birthday parties involving good friends, lobsters, croquet and craft beers, we're feeling rejuvenated getting back at the business planning–perhaps a little jaded, but ever hopeful that the right space will come up. Although we had pretty well finished our business plan (which has felt a lot like writing my master’s thesis again), in many ways we’re back to square one. Without a confirmed location we can’t come up with very accurate cash flow projections, nor can we proceed with fundraising our licensing applications.
But I guess it’s not quite square one after all. We were out scouting the dwindling downtown location options again today and realized that all the work we put into researching the feasibility of each of those spaces has left us better equipped to assess whatever we come across next. In the process we’d uncovered a lot of tricky regulations and restrictions that we now have front of mind when viewing the options. We’re also opening our minds up to variations on the original Townhouse plans, perhaps operating on a smaller scale or combining forces with a complimentary business…
Anyway, I wanted to share this little video on Worth Brewing Co. in Northwood, Iowa with you. It’s very similar to what we’d like to do here in Antigonish–Peter, co-owner and master brewer, even shares Terry’s recently cultivated interest in stained glass. Northwood has a population of somewhere between 1200 and 2000 residents, who proudly support their very own micro-micro-brewery. They use the SABCO Brewmagic system too, brewing 5 regular brews year round (an Oatmeal Stout, a Pale Ale, an IPA, and a Mild), plus seasonal and even mystery beers. Their little brewpub has apparently done a lot to revitalize Northwood’s historic downtown. They’ve turned a lot of locals who had previously been Bud light drinkers into craft brewing enthusiasts, and reportedly attract legions of beer drinkers from much farther a-field. They’ve even started a home-brewing club for the locals. The video is by Northern Brewer’s Brewing TV (Terry’s fave internet TV show, hosted by amiable beer nerds, Jake and Michael). The first half of the episode tours the brewery and the town of Northwood, and the second half (which unless you're an avid home brewer you may want to skip) is a how-to segment with Jake and Michael brewing one of Peter’s Northwood pale ales.
Revisiting the Worth Brewing story has buoyed our hopes of bringing craft brewing to Antigonish after our recent disappointments, and we hope you’ll enjoy it too! As always any feedback or comments are appreciated. Till next time, we're back on the look-out for the Townhouse's location. Cheers!
Posted by Rose at 2:42 PM